Today I thought I might do a little review of the craft boxes we ordered a month ago. I had never heard of these until very recently and thought we would give them a try. We ordered 2 different kinds, Kiwi Crate and Green Kid Craft. They both had a theme and crafts to go along with them. Kiwi Crate had a modern art theme, with supplies for a painting and a mobile as well as a booklet with info and instructions for a few other activities. Green kid craft had a space theme, the crafts inside were a shooting star, rocket launcher and another about the constellations.

B loves to paint so any chance she gets she is all over it. I ripped off the pieces of tape and she placed them on the mini canvass that was provided, and painted away. Meanwhile S was wanting to make a shooting star, it was a very simple craft which I was thankful for because he has the attention span of, well, a 3 year old. D made a rocket launcher, he is not a big craft guy but he enjoyed it and it was easy enough for him to do on his own. 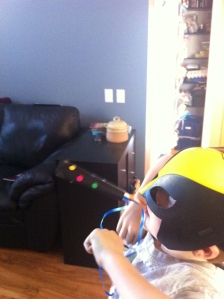 The painting project went over so well that another day we went to the craft store and bought the supplies to make a big one for everyone. It was really fun watching them and how differently they look at things. I love that they are who they are, and that even so young, who they are is set in stone and they are so unique and such individuals (okay that’s another post for another day). 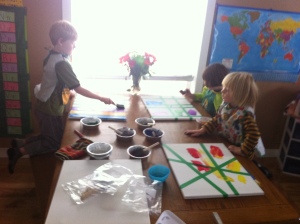 Later on in the week B grabbed the craft box and wanted to try another one. I tried my hardest to space out the crafts to maybe one a week or so but she is so busy ALL.THE.TIME. that she blazed thru them in a little over a week. The mobile was fun to make with her and pretty easy. Pretty much all there was were pipe cleaners, buttons, and stickers. She was pretty proud with the end result and hung it up in her room.

The last one was my favourite one. It came with a toilet paper roll, 4 stickers of different constellations, a thumb tack, paper, flash light and elastic band. You put the sticker onto paper, then wrap it around the toilet roll and punch holes with the thumb tack. Then shine the flashlight thru and tada…… you have the big dipper in your laundry room. It was hard to get a good picture but you get the idea.

All in all I was really happy with these boxes but don’t know if we will get the full year subscription. I might suggest it to grandparents though as Christmas gifts 😉

P.S. I thought I would post the referral links for each craft box in case anyone as interested. You will receive $10 off your first box (as will I)

Life in the Trailer